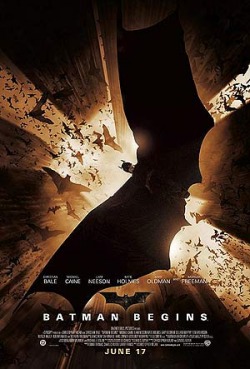 So what are my thoughts on this film, which I've always felt was overshadowed by its sequel?

Ah, Batman Begins.  It's always been a bit of a silly title, as well as grammatically-incorrect.  Presumably they wanted to go with something a little more catchy than Batman: The Beginning or Batman: In the Beginning.  In my opinion, the ideal title for this film would've been simple: Bruce Wayne.

This movie is, more than anything else, a character study.  Bruce Wayne carries every moment of the movie, and every moment is about the growth of his character.  This film eats, sleeps, and breathes Bruce Wayne and has its Batman lore studied perfectly.  If you can only see one Batman film, this is the place to go, not Tim Burton's film.

I still stand by my position that The Dark Knight is a stronger film, as it tells a better stand-alone story.  Regardless, nothing can change that this film is a Batman 101, that feeds every story you'll ever want about this character.   I won't be doing a scene-by-scene description for this film as pretty much everything about it is on the surface.  This will be more of a general editorial.

Batman Begins is about a man named Bruce Wayne who has a muddled identity.  Like Buddha, he leaves his kingdom to see the world, to hide from the identity of his birthright.  He is recruited by the League of Shadows on a crusade that he believes will help Gotham City.  His training is strangely therapeutic and his depression and anger, haunting him all his life, are transformed into psychological combat skills.  Then he learns that the League of Shadows have evil intentions.  Yet, Bruce is able to take what he learned from them and become a warrior anyway, but one that plays by his own rules.  It says something that Batman is born in what turns out to be an evil campaign, and suggests that Batman has the darkness of a villain in him.

As the film continues, we start to lose sight of our Bruce as he adopts two stage personas.  As "the public Bruce Wayne" he pretends to be a buffoonish playboy, thus sacrificing any kind of normal life.  As "Batman" he speaks in a growly voice and keeps his interactions with others, particularly Gordon, very short.  Only in his conversations with Alfred and Lucius Fox (and eventually, with Rachel) does he allow a third personality, the normal personality, to speak through: a quiet, idealistic man, with more brains and heart than either of his two stage personalities would let on.

Rachel Dawes, pretty much the only female character in the film, is given far too little to do.  Throughout Batman Begins, she serves the purpose of Batman's friend on the other side, as well as a potential love interest.  Remove her character altogether and the story would not suffer greatly.  In The Dark Knight she became a symbol more than an actual character.  Which worked fine as her death played a major role in both Bruce and Harvey Dent's development.  The sad truth is that female characters just aren't Christopher Nolan's thing.  But this has been true of other great storytellers, from Victor Hugo to JRR Tolkein to Sergio Leone.

For me, Batman Begins suffers in its third act.  Now obviously these criticisms are just my opinion and if they don't bother you, that's fine.  But here's what keeps the story from being perfect for me:

1. The big twist of the third act, the revelation that Bruce's old mentor Ducard is in fact R'as al Ghul and the ultimate villain of the film, just isn't as effective as it could have been.  In the first part of the film, we watched Ducard train Bruce and they appear to build some bond, but this was never properly established.  Throughout these scenes, Bruce seems to regard Ducard with ambivalence.  It's not clear how Bruce feels.  A scene where it's established that they've truly become buddies would've helped tremendously.  When Bruce learns of the League's evil intentions, Ducard is right there, justifying them, yet a minute later Bruce rescues Ducard when rebelling from the League.  Does Bruce have such a strong bond with his mentor that he's convinced he's really a good guy underneath it all?  This struck me as an odd way of the film trying to tell us that Bruce felt a bond for Ducard without bothering to actually show it.  Then, after going through all the trouble of rescuing his "friend," Bruce leaves him with strangers and never once bothers to check in on him.  Bruce's exactly feelings for Ducard are unclear.

So, in short, the revelation that Ducard is the film's true villain could have been a moment of great drama where Bruce realizes his old friend and mentor was now his enemy.  Instead, it feels like we only get half of that, and Bruce's reaction is more "Oh, you?  I forgot you were in the movie."

2. Once it's established he's the villain, there is surprisingly little depth to his character.  He wants to destroy Gotham for its own good?  This makes him far less interesting than either the Scarecrow or the Joker, who operate on sadism.  Furthermore, the revelation that the League of Shadows caused Gotham's economic depression, and thus indirectly killed Bruce's parents, has always struck me as contrived.  Their plan to combat Gotham's decadence is to...indirectly increase the crime rate?  The idea that they're trying to "cure" Gotham but are only making it worse could potentially have been a poetic idea, but it just makes the League look idiotic.  Worst of all, Ducard/Ra's has no clear motivation; I know he mentions his wife having been murdered earlier, but this is not really explored.  He's doing what he's doing because he think he's doing a good thing, but that's just too generic a motivation for a villain.

3. The climatic fight on the monorail is a good action sequence, though less than the movie deserves (I prefer the more creative climax of The Dark Knight).

4. After the battle, there's then way too much anti-climax.

On the whole, I walk away from Batman Begins with a sense of excitement.  We now know the story of this bat, and his many adventures are still to come.  But how far can he take them without it eating him inside?  Are his actions moral?  Is he a hero or anti-hero?  That's for the Gotham City in all of us to decide.